Skip to content
What is Net Neutrality?
Net Neutrality means that telecom and Internet service providers must treat all data on the Internet equally, and not discriminate or charge differently by user, content, site, platform, or application.
Examples in Net Neutrality debate:
Zero ratings: is a practice by which internet operators offer free data for specific applications
Free Basics: is an open platform that any developer can build something for regardless of who they are if they follow the basic rules. Such a product will be available for free to all subscribers of service in partnership with FB.
Benefits of sponsored data :
All these benefits will help in enhancing capacity of the population and thus give an impetus to the economy.
Why opposition:
What economics and politics suggest about net neutrality:
Economics-
Politics-
TRAI rules against differential pricing: 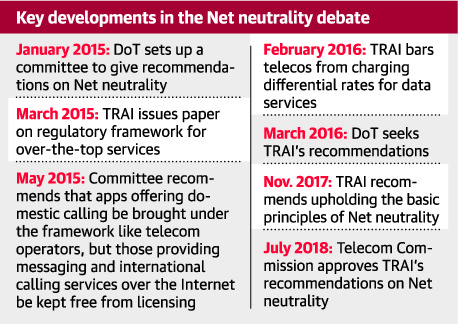