Skip to content
Facts:
Recent Steps:
What are Generic Drugs?
What is Jan Aushadhi Store?
The Government, in June 2015, had proposed to open 1000 more stores under the ‘Jan Aushadhi Scheme’ to make available quality generic medicines at affordable prices through these special outlets.
It is a scheme which seeks to make available quality medicines at affordable prices for all, especially the poor and the disadvantaged
What is BPPI?
BPPI (Bureau of Pharma Public Sector Undertakings of India) has been established under the Department of Pharmaceuticals, Govt. of India, with the support of all the CPSUs for co-coordinating procurement, supply and marketing of generic drugs through the Jan Aushadhi Stores
Concerns related to Generic Drugs:
Way forward
The central government has taken an initiative ‘Jan Aushadhi‘ to avail citizens of low cost medicines. What will be the benefits of the scheme to the people and the pharmaceutical companies? Critically examine. (200 Words)
The Centre will procure medicines in bulk from public as well as private drug manufacturing firms and rebrand them under ‘Jan Aushadhi’. These will be sold in the retail market at a competitive price, allowing consumers to buy a cheaper yet quality product from the government.
To start with, the government has identified 504 essential medicines, which include antibiotics, painkillers, vitamins and medicines used in treatment of cardiovascular, respiratory, diabetes and gastroenterology diseases. “In the first phase, we have mostly identified medicines from the top 100 drugs based on their sales. More medicines as well as medical devices will be included in the second phase, 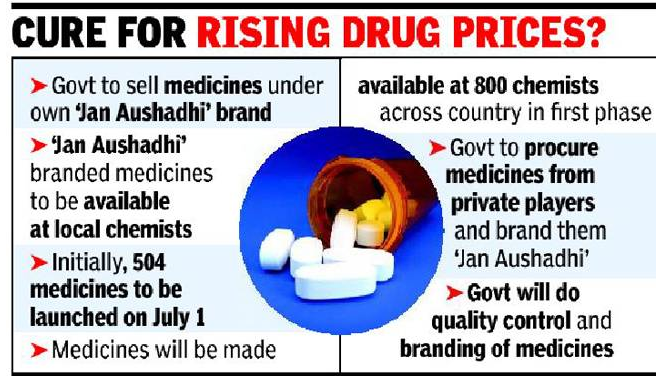 It is said that India is becoming home to production and trial of substandard drugs in recent years. In your opinion, why such drugs are produced and distributed? How can they be regulated? Critically comment. (200 Words)
Menace of substandard drugs is highlighted by CAG in case of CGHS and Army Depots.
Reasons:
Measures: