The Annual Status of Education, ASER report by the NGO Pratham which measures the learning outcomes has been released. The report was based on an annual household survey which covered 5.46 lakh children in 596 rural districts across the country. 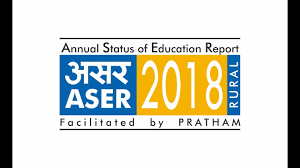 Findings of the ASER 2018 Survey

The important findings from the ASER 2018 survey are:

These sobering realities demand policy interventions. The government must devise a policy direction to address these critical gaps in learning while it formulates the National Education Policy.