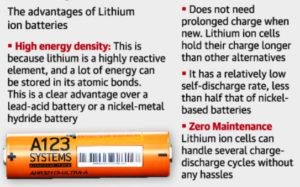 Disadvantages of Li-ion Batteries:
NOTE : Lithium is also used as a drug to treat bipolar disorder and is soon becoming the metal to treat a world polluted by excessive carbon emissions.