“Knowledge will forever govern ignorance; and people who mean to be their own governors must arm themselves with the power which knowledge gives.” – James Madison.

Discuss this statement in the light of recent developments that are empowering citizens. (200 Words)
Governance without information was “a Prologue to a Farce or a Tragedy”. – Madison
James Madison traditionally viewed as the Father of the United States Constitution, is also seen by many as a defender of open government.
Indian Parliament enacted landmark act “Right to Information, 2005” empowering citizens complete access to information on government‘s business. Parliament also enacted lokpal and lokayukta act 2013. But India is yet to get her first Lokpal appointed.
Empowering People of India:
The RTI Act applies to all States and Union Territories of India except Jammu & Kashmir, where J&K Right to Information Act is in force. There certain exempt from disclosure of information under section 8 of the Act.
Private bodies are not within the Act’s ambit directly. But in a decision of Sarbajit Roy versus Delhi Electricity Regulatory Commission, the CIC also reaffirmed that privatised public utility companies continue to be within the RTI Act- their privatisation notwithstanding.
The Central Information Commission (CIC) has held that the political parties are public authorities and are answerable to citizens under the RTI Act.
Recent Supreme judgement on BCCI also reveals necessity to empower public for RTI in such a private body which governs public sports in “Territory of India”.
Currently, India operates without CIC and around 15,000 applications are pending and need to be rectified.
Empowering people with RTI and LOKPAL is the prime duty of government at the centre. Good Governance is only possible if the tools to nail mis-governance and corruption are working in order and easily accessible for general public.
What do you understand by the below quotes and do you agree to their views? Give examples to support your view from Indian context. (150 Words each)
(a) “Patriotism is your conviction that this country is superior to all others because you were born in it.” – G.B. Shaw
(b) “Relativity applies to physics, not ethics” – Albert Einstein 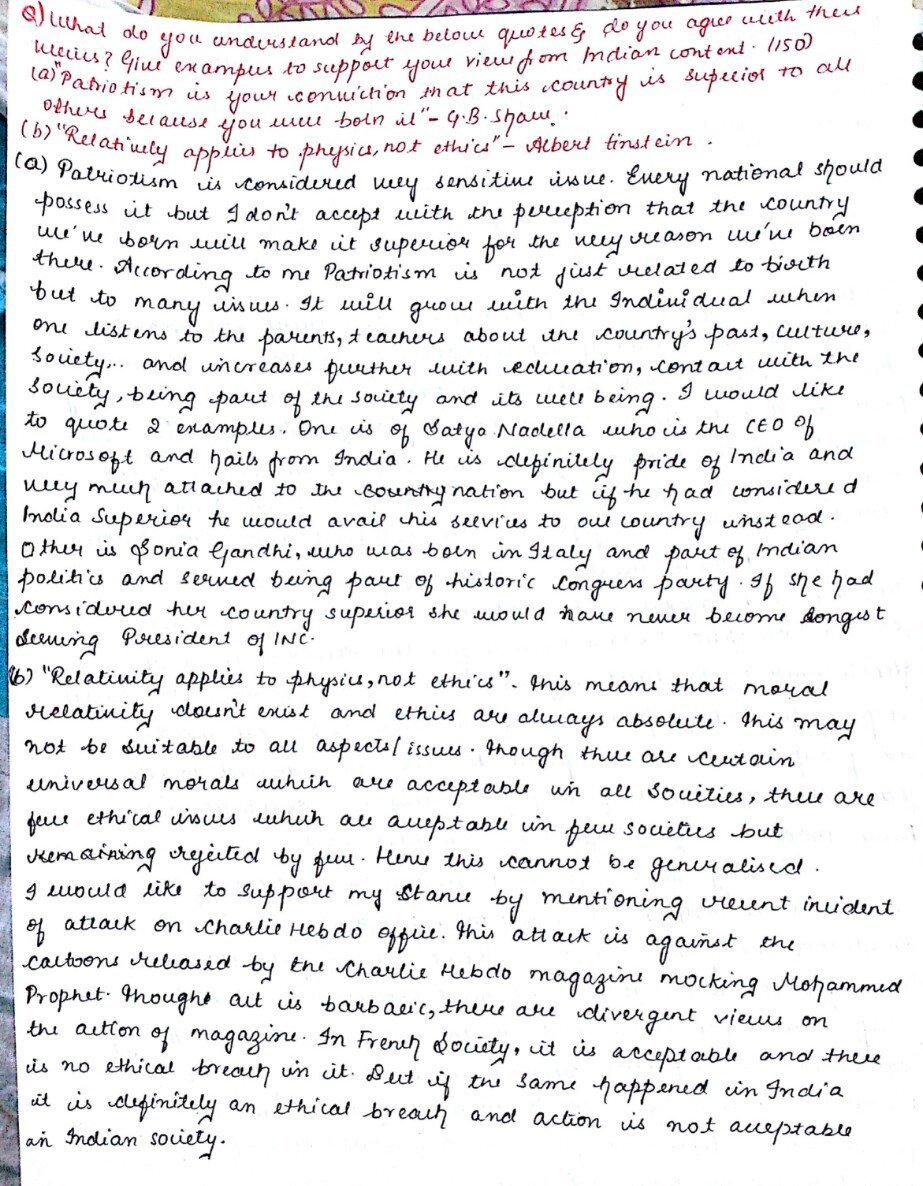