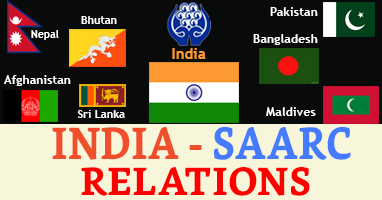 Reason for decline in financial assistance:

Analyse with suitable examples why maintaining friendly relationship with its South Asian neighbors will be good for Indian economy. (200 Words)
“One can choose friends but not neighbors”

India with its long history had problems with many of its South Asian neighbors. For any country to continue their journey towards growth contentious relations and hatred from neighbors will be a thorn in their progress and India is no exception.

they can benefit immensely with their growing population and needs. The problems of terrorism, border disputes, tax issues if solved then these nations will add to Indian economy growth

Critically discuss the efforts made by SAARC countries to forge a strong social and economic integration between their people and the challenges they are facing in this pursuit. (200 Words)

SAARC(est 1985) is a regional grouping of 8 South Asian countries. They have inherent positives like similar historical context, topographical and demo-graphical features, natural resource endowments and social cultural ethos. SAARC has taken many initiatives for the economic and social integration of the region such as –

Having said that, this region has several issues like-

SAARC countries would do well to build on their natural strengths and resolving issues mutually to help the region prosper for the betterment of their people.

India is poised to become an economic powerhouse. This can’t be done in isolation from other economies. FTA is an avenue where India can achieve economic and trade integration with her partners.

India currently has FTAs with ASEAN, Korea, Japan, Malaysia, Singapore, Sri Lanka and Thailand. FTAs can be formulated to mutually benefit partner countries by abolishing tariffs on movement of goods and services.

Specific goods and services can be open for FTA and others might be kept out of its purview. SAFTA is an FTA between all the South Asian countries.

Though it’s a FTA it keeps essential commodities like agricultural produce, automobiles etc. out of its scope. Thus SAFTA is a weak FTA and hasn’t achieved economic integration at all. This is mostly due to India’s geographical and economic size which might be intimidating to non-exporting countries.

As a result south Asia is one of the weakest economically integrated regions of the world. Over 40% of EU trade happens within EU while it is less than 5% for South Asia. SAFTA thus hasn’t affected India’s economy the way it could.

But, it has enhanced the status of India of non-reciprocity in behaviour among neighbouring countries and has paved the way for better regional integration among SAARC nation.  Further it has also provided boost to its Act East policy, since it paves way for increasing economic growth of North-east region.