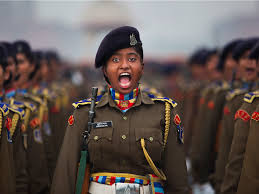 Key arguments for not inducting women in front line were:

Women Army officers are still denied permanent commission at par with men. Analyse the reasons behind it. How far patriarchal and macho mindset is responsible for such discrimination? (200 Words)

The recent affidavit filed by the Indian Army in the Supreme court expresses discouragement to appointing women officers in permanent commission. This is a retrogressive move and reiterates the patriarchal mindset in the Indian society.

‘War has no runners-up, hence the need for an efficient war machine that will ensure victory,’ it said. This move not only denies equality to women but also makes them ―lesser citizens of India as they are not being a the same rights as men. The reasons cited by the Indian Army include:

These reasons appear farce and reflect a patriarchal mindset because :

In the light of the fact that the Indian army is facing an acute shortage of officers, do you think more women should be recruited to the forces? Examine the challenges and prospects of such a move. (200 Words)

The Indian armed forces have been facing an acute shortage of officers. Due to attractive jobs with better salaries in private sector young and mid-level career officers are moving to private sector, and the situation has worsened since 1990s. Economic reforms have widened the pay, lifestyle and social prestige gap between the armed forces and the private sector. Lack of officers mean that existing officers are overburdened. This has huge strategic implications when the army is involved in fighting insurgency in large parts of the country as well as training for its primary mission of defending the country from external forces. While women were allowed to join the armed forces in 1992, they could only join as Short Service Commission (SSC) officers able to serve for a maximum of 14 years and that too only in non-combat arms like Army education corps, Engineers, Signals etc. While recently women have been granted permanent commissions, the ban on service in combat units continues.

The task before defence establishment is huge and is critical. Women regiments can be started on pilot basis and the results can be used to address the issues leading to regular induction of women in army, navy as well as air force. Like in other spheres, here also the bias against will disappear, sooner or later.