Skip to content
What is the dispute?
Pre-independence issue:
The issue dates back to 1892 when an agreement was filed between Madras Presidency and Mysore for arbitration. Later, attempts were renewed to arbitrate between the two states under supervision of Government of India and second agreement was signed in 1924.
Post-independence efforts:
In the pre-independence era, these disputes were resolved by the British by arbitrary talks and discussions. But the real problem started when in, 1974, Karnataka (Mysore) asserted that the 1924 agreement entailed a discontinuation of the water supply to Tamil Nadu (Madras) after 50 years.
Cauvery waters tribunal:
Owing to Tamil Nadu government’s appeal to the Central government in 1986 to constitute a tribunal for solving the issue under Inter-State Water Disputes Act, 1956, the Cauvery Waters Tribunal was established on June, 2, 1990.
In 2007, after sixteen years of hearing and an interim order later, the Tribunal announced its final order. It concluded that the water availability in Cauvery stood at 740 tmc ft, Tamil Nadu would be allocated 419 tmc ft water (56.62%) and Karnataka 270 tmc ft. (36.48%). Kerala was given 30 tmc ft (4.05%) and Puducherry 7 tmc ft (0.94%). However, both Tamil Nadu and Karnataka filed a review petition before the Tribunal.
In 2012, Prime Minister Manmohan Singh, as chairman of Cauvery River Authority, directed the Karnataka government to release 9,000 cusecs of water daily. The Supreme Court slammed state government as it failed to comply with the order. The government offered an unconditional apology and started the release of water leading to widespread violent protests. 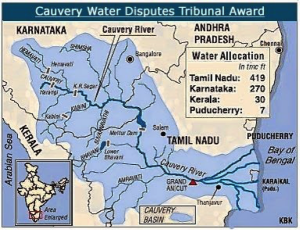 What’s the issue now?
The dispute escalates when monsoon fails, as there is lesser water to share. And this year, Karnataka and Tamil Nadu have received less than normal rainfall during the monsoon. Karnataka says it cannot release water to TN for agriculture as it needs it for drinking water purposes.
In August this year, the Tamil Nadu government said that there was a deficit of 50.0052 tmcft (thousand million cubic feet) of water released from Karnataka reservoirs, with respect to the minimum limit directed by the CDWT. The Karnataka government said it wouldn’t be able to release any more Cauvery water, as low rainfall during the monsoon had left its reservoirs half-empty. Tamil Nadu then sought the apex court’s intervention saying its farmers needed the water to begin cultivating samba crops.
On September 5, the Supreme Court ordered the Karnataka government to release 15,000 cusecs of water a day for 10 days, to Tamil Nadu. This led to widespread protests and bandhs in Karnataka.
What’s the main problem?
The reason for this endless cycle of sporadic litigation and ad hoc adjudication is that both Karnataka and Tamil Nadu continue to avoid any mutual engagement to share the shortfall during distress years. And there is no permanent, independent mechanism to ensure this.
What needs to be done?
The fact is the Cauvery basin is overdeveloped and legal instruments are insufficient to address the recurring water crisis.
Note: Use Cauvery dispute in :
Related Notes: